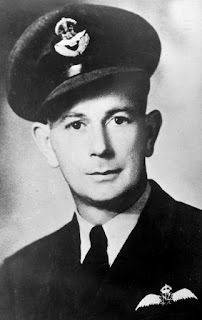 Lloyd Allan Trigg, the son of Arthur and Cecelia Louisa Trigg, (nee White) was born at Houhora, Northland, New Zealand 5 May 1914. He entered Whangarei High School in 1927. Lloyd’s father died in 1927 and his mother, unwell for some time passed away in 1930. Those two events made Lloyd even more determined to succeed. He did well at school and broadened his life taking his skill as a competent violinist a step further by joining the school orchestra in 1929. The competitive and team spirit of rugby appealed and Lloyd was in the 1st XV in 1931 gaining his School colours that same year. About this time he took up distance running, one sport probably benefiting the other. In 1931 he was also the Platoon Sergeant for ‘B’ Company in the School Cadets. In studies Lloyd set some clear goals. He qualified for University Entrance in 1930 and his objective was to become a school teacher. He achieved his training college entrance in 1931 and enrolled at Training College. He left Whangarei High School in July 1932. However he was only to remain in training college for a short time as the depression dictated that he was needed on the family farm back in Victoria Valley. With the coming of World War Two Lloyd served in the New Zealand Army – Territorial Force for one year before joining the Royal New Zealand Air Force (RNZAF) as an Airman Pilot – Under Training 15 June 1941. After attending training school in Canada Lloyd obtained his Pilot’s Badge on 16 January 1942, and commissioned in the rank of a Pilot Officer. After receiving further training in flying Hudson aircraft he embarked for the UK on 28 October 1942 He was posted to West Africa in December 1942 where he joined No.200 Squadron on the 1 January 1943. As a pilot of Hudson aircraft he took part in 50 operational flights, these being reconnaissance patrols, convoy escort flights and anti-submarine patrols. The squadron later converted to Liberator planes. While with 200 Squadron Lloyd carried out a large number of shipping reconnaissance’s and convoy escorts. For Lloyd’s conspicuously good example of keenness to fly under all conditions, he was awarded the Distinguished Flying Cross (DFC). Lloyd never knew that this award had been bestowed upon him On Wednesday 11 August 1943, while flying on a different mission, Lloyd Trigg sighted a surfaced submarine on its way back to base in France. He engaged the sub and took his aircraft down to 50 feet. His Liberator was repeatedly hit by 20mm cannon fire as it ran in to bomb, fire breaking out in the fuselage as a salvo of depth charges were released to straddle the U-Boat. Both the hunter and hunted were mortally injured. Lloyd’s aircraft plunged into the sea 300 yards behind its victim, exploding on impact. There were no survivors. The U-boat sank minutes later. Praise from the U-boat commander for the determined attack upon his ship by Lloyd Trigg and his crew led directly to the posthumous award of the Victoria Cross. The Victoria Cross to the man from Victoria Valley. The citation reads ‘Flying Officer Trigg’s exploit stands out as an epic of grim determination and high courage’. (Via Whangarei Boys’ High School)
Posted by Contact at 2:42 PM No comments: 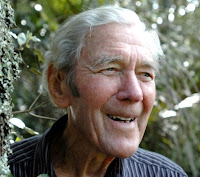 (Photo: Ben Watson North Shore Times) Jim Holdaway 1918-2012 Nature-lover worked to protect marine heritage - (By Andrew Stone NZ Herald January 21, 2012) Few New Zealanders did more to promote the Hauraki Gulf than Jim Holdaway. For decades, he fought for greater protection of the gulf and its islands. He firmly believed the waters on Auckland's doorstep were a treasure and part of the nation's natural heritage and he did all he could to keep the maritime asset under public control. In conservation circles, many consider him the father of the Hauraki Gulf Marine Park. Besides that legacy, he assiduously promoted the creation of regional parks and walkways. Born in Carterton, Mr Holdaway moved north and went to Whangarei High School. At the start of World War II, he joined the Royal New Zealand Air Force. He completed his training in Canada, graduating with the highest honours on his course. 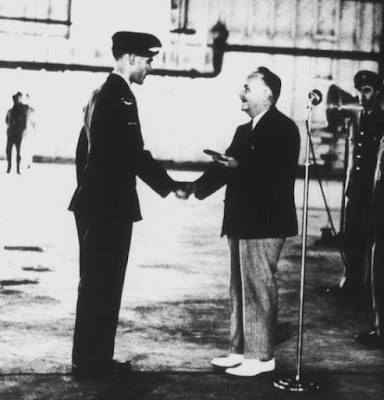 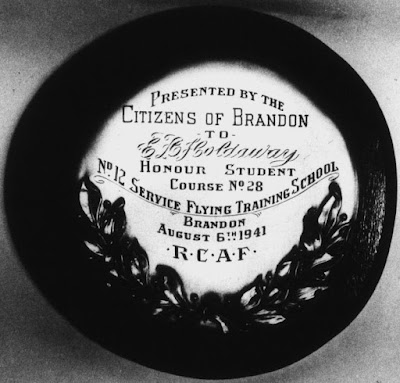 (Photo of plaque) In 1942, he was awarded the Distinguished Flying Cross for bravery, carrying out missions with determination and courage. Citation: F/O. E. A. HOLDAWAY. R.N.Z.A.F., No. 37 Sqn. "F/O. Holdaway has completed many long distance operational flights over Cyrenaica, Crete, and enemy-occupied territory in Egypt. As a captain of aircraft, he proved to be an outstanding figure during the recent emergency. Pressing home each attack with coolness and determination, whatever the opposition, be never failed to complete his mission, sometimes with his aircraft in a state of unserviceability which would have fully justified a return to base." In 1944, he received a bar after again showing resolution as a pathfinder for heavy bombers in an attack against enemy targets. The citation for his second award noted that the flight-lieutenant returned to his base from a raid over Germany on one engine after his Mosquito fighter- bomber was hit by shrapnel. In 1945, while still in England, Mr Holdaway married Ann. He brought her home to New Zealand and they started a market garden in Northcote. Later, when approaches to the new Auckland Harbour Bridge cut a swathe through the North Shore, the Holdaways bought a 200ha farm in Dairy Flat. In the early 50s, Mr Holdaway entered local body politics as a Northcote Borough councillor. He was Mayor of Northcote from 1959 to 1963 and then made the jump to regional politics, helping create the Auckland Regional Authority. For 19 years he was a member of Hauraki Gulf Maritime Park Board. His love of nature saw him serve on the Tree Council for many years and was its honorary president. In the gulf, he was a founding trustee of the Hauturu Supporters Trust, which works to support the special features of Little Barrier Island. He was the first chairman of the Motutapu Restoration Trust. He loved birds and could be considered a "twitcher" - always keen on sighting a rare species. He was a terrier on the issue of weeds invading the gulf, and did alll he could to eradicate menacing species which threatened the recovery of native plants. Generous hosts, the Holdaways opened their Northcote property - an urban oasis of native trees - for the many causes they supported. Jim Holdaway is survived by Ann and their children, Nigel, Mark and Sarah.
Posted by Contact at 8:12 AM No comments: 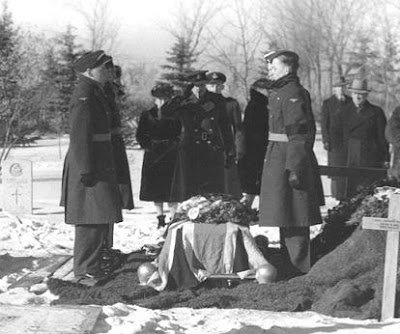 Leading Aircraftman Robin Arthur Percivall Pott (Course 92) died February 16, 1944. He was the son of Sir George Stanley Pott and of Lady Pott of Clifton Hampden, Berkshire, England.Burial in Brandon Cemetery. (Photo: G. Simpson)
Posted by Contact at 9:05 AM No comments: 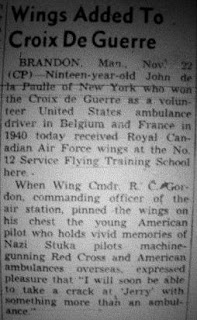 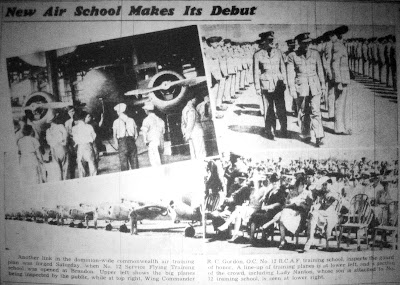 Email ThisBlogThis!Share to TwitterShare to FacebookShare to Pinterest
Home
Subscribe to: Posts (Atom)
Copyright - No part of this material (unless credited to another source - Crown Copyright, RCAF, IWM, AWM, Library and Archives Canada, London Gazette, etc.) may be reproduced, stored in a retrieval system, or transmitted, in any form or by any means, electronic, mechanical, photocopying, recording, or otherwise, without the written prior permission of the author. Some excerpts on this site are from the book, Immigrants of War.

Every reasonable effort has been made to locate copyright owners. If you identify yourself as the copyright owner of material on this website and object to its continued availability online, please contact: wpf13@hotmail.com

I welcome any photos and information about No. 12 Service Flying Training School, Brandon.

First graduates at Brandon. Wings Parade held in No. 2 Hangar at 1500 hours. Wings were presented to the graduating class by Air Commodore Ryan. After the presentation of the wings Mayor Young presented an engraved plaque to the honour student, LAC Jim Holloway.

F/O. E. A. HOLDAWAY. R.N.Z.A.F., No. 37 Sqn.
"F/O. Holdaway has completed many long distance operational flights over Cyrenaica, Crete, and enemy-occupied territory in Egypt. As a captain of aircraft, he proved to be an outstanding figure during the recent emergency. Pressing home each attack with coolness and determination, whatever the opposition, be never failed to complete his mission, sometimes with his aircraft in a state of unserviceability which would have fully justified a return to base." 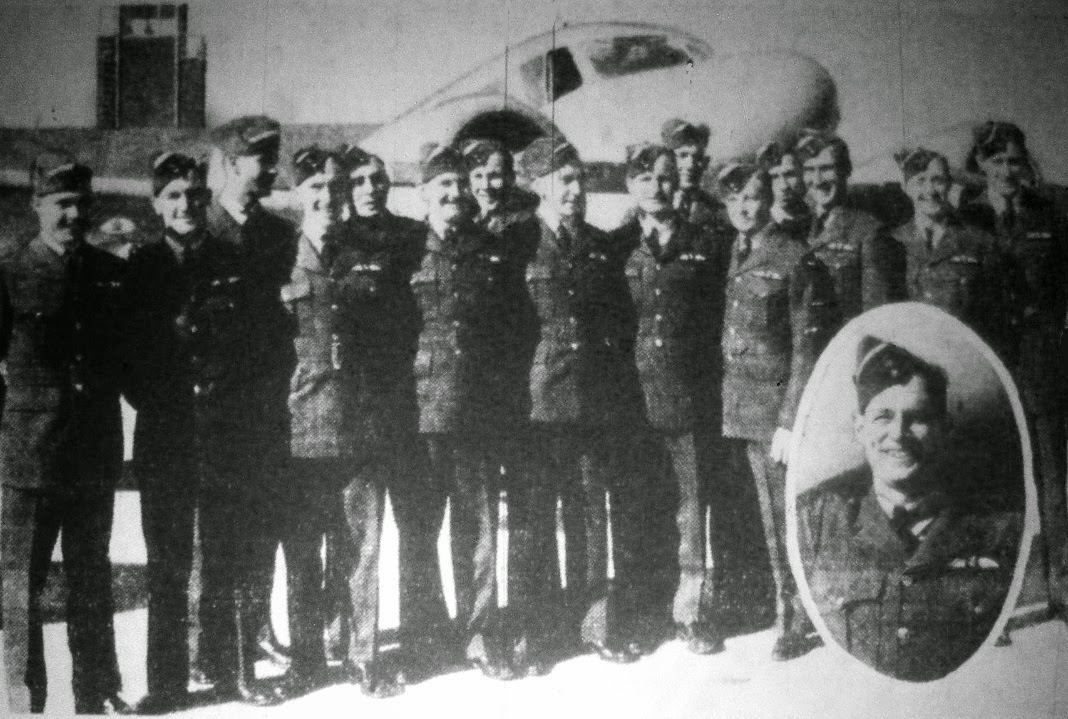 Wings parade held in the drill hall. Group Captain Scott C.O. of No. 2 'M' Depot presented wings to the 51 graduates.

Hernan Buseta, a building contractor from Santiago, Chile, was one of the graduates.

"The boys, Canadians and Americans in my classes were all good fellows and the people in the towns where I was stationed were very kind.

"The instructors made every effort to help me, offering special classes and two young fellows, Frazer and Arthur Wood, English boys from Guatemala, explained the most difficult points to me in Spanish."

Wings parade held in the Drill Hall at 1500 hours 34 graduates.
Wings were presented by G/C/ Emmett of No. 41 SFTS Weyburn

Mayor Young presented wings to 44 New Zealanders and 15 Canadians. Honour plaque presented to LAC Elder of New Zealand. Under new set up, these students will remain on Station for another four weeks.

(J/12567) John Edward Andrews, Hollywood was top in class and received the City of Brandon plaque 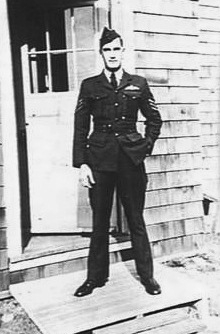 (414333) William John Amour posing outside his barrack after receiving his flying badge and sergeant's stripes at Brandon September 25, 1942. Shortly after graduation, he was placed under stoppage of pay amounting to $6.00 for damage done to the station amplifier! Armour later became a pilot officer and was awarded the Distinguished Flying Cross. He was presumed killed December 20, 1943, when the No. 428 Squadron Halifax bomber he was piloting was shot down. The Australian draft in this course departed Sydney April 24, 1942 and arrived in Vancouver, B.C. May 15. 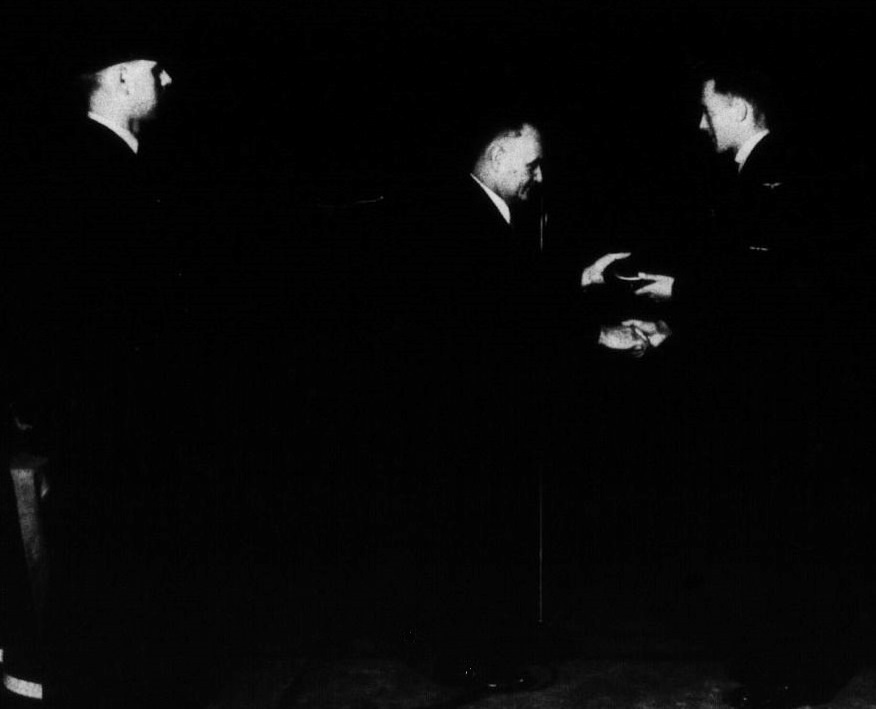 Graduation Thursday evening in a hangar prepared specially for relatives and guests of the young airmen.

The wings party, in command of Flying Officer T.G. Anderson, faced the saluting base, while three other training squadrons formed the flanks. The parade was commanded by Squadron Leader W.G. Welstead, administrative officer of the school. Wing Commander E.H. Moncrieff was in charge of the parade.

Lt. Col. S.S. English, officer commanding the A-4 artillery training centre, Brandon, told the class that the job facing them in the near future was that of eliminating the enemy, and every thought should be subordinated to this purpose,

"We have not become ruthless enough, we must become used to killing, facing it as our essential duty."

Luck had remustered from AFM to aircrew in March 1942 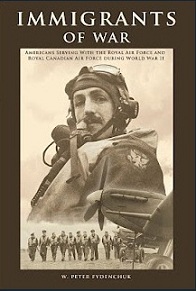 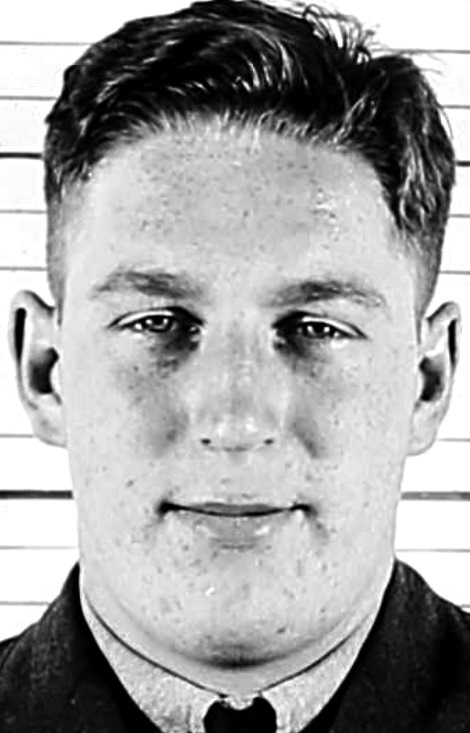 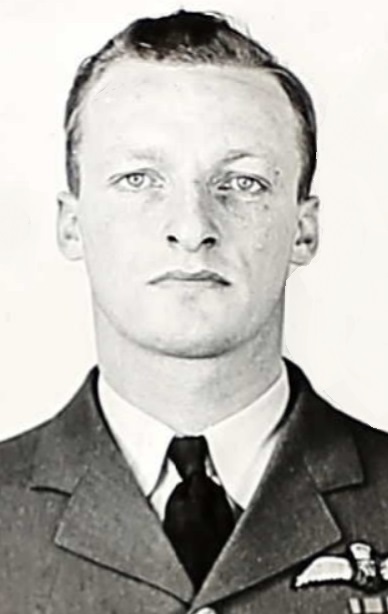 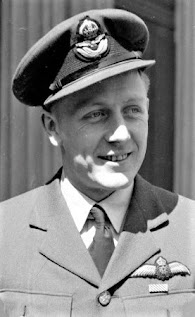 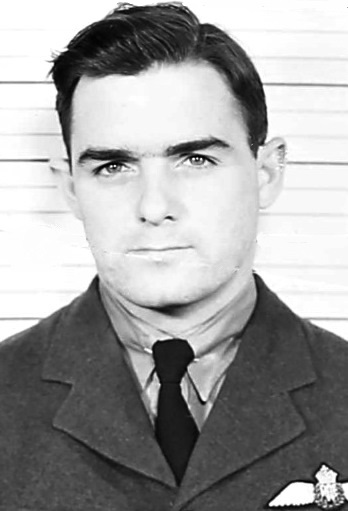 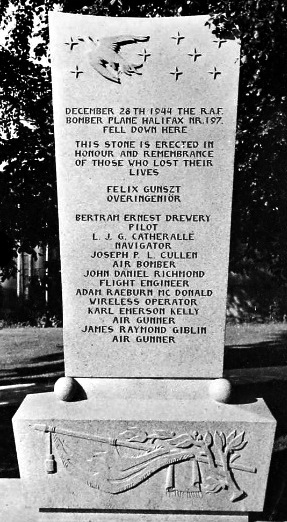 Monument erected in Sandefjord, Norway near the spot where Halifax fell December 28, 1944. The monument was designed by the plant architect and erected by the Jahres Chemical Company. 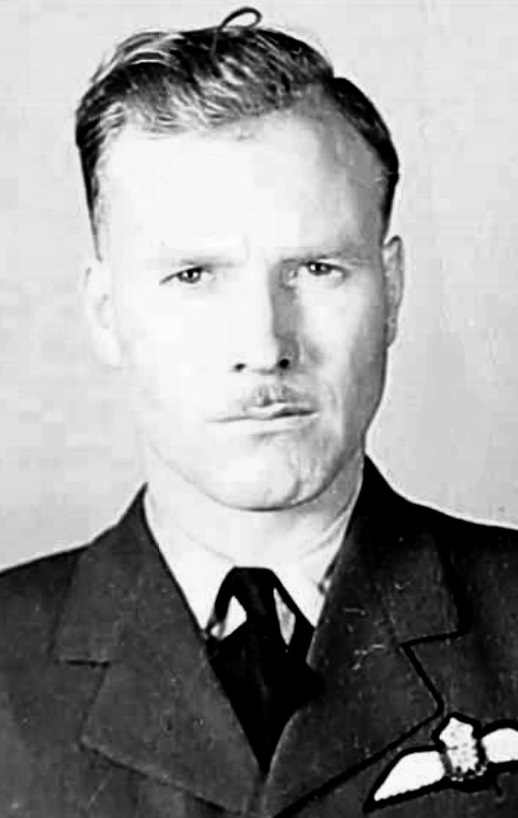